Following on from the art at home series, I thought I'd share three new pieces we recently added to our hall gallery. 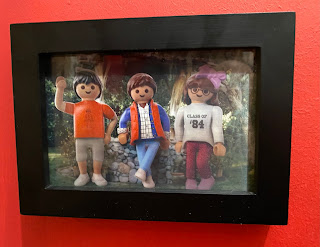 First up is a postcard. We don't really do advent calendars in this house, and especially not big commercial ones, but when I heard that Playmobil had produced a Back To The Future calendar this year, I knew I had to get it for Dan. The BTTF trilogy are his favourite films and we've had fun through December seeing what was behind each window and building up the Twin Pines town scene with Marty, Doc, Biff and all sorts of accessories. The postcard here came with the advent calendar. It's a lenticular print of a Playmobil reconstruction of the family photo Marty carries with him during the film. As Marty meddles with the future, his siblings fade from the photo. With this postcard, viewing it at different angles makes his siblings disappear! 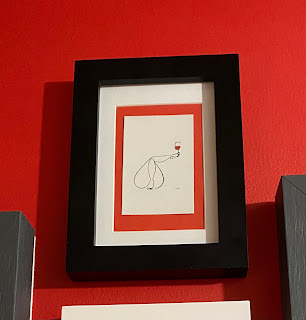 This is a business card which we've framed and added to the wall. A good friend of ours recently moved away to live in another country. Just before she went, the artist Judith Clara's adverts came up in my social media feed and this particular image reminded me of the friend (although I must add I've never seen her in this position!) I bought a print for her as a leaving gift and the business card came with it. 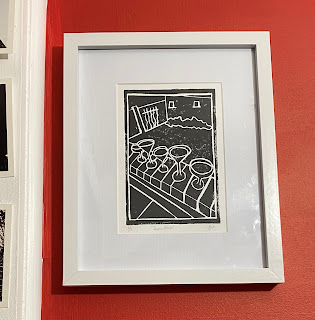 This third piece was a Christmas gift from one of our lodgers. One of the house rituals we've enjoyed through lockdown has been Quarantinis - a (sometimes) daily cocktail which marks the end of the working from home day, and the start of the evening. We've captured almost all of them in photographs too, much to the annoyance of some of our friends! The lino print above is from one evening when we'd made a round of Vieux Mot cocktails and lined them up on the garden wall ready for drinking. We've really appreciated our garden and patio during lockdown because it gets the best of the evening sun, and provides great space for relaxing, eating and catching up with the neighbours. This print is a lovely reminder of this season.

Email ThisBlogThis!Share to TwitterShare to FacebookShare to Pinterest
Labels: art

A gallery of our art, part 5: upstairs

The final instalment! I've really enjoyed creating these posts for Kerenza's gallery. All the art in our house has a story behind it and it's been lots of fun remembering them all as I've added them to the list. This is the last group - the art we have upstairs. It's fair to say that there's plenty more wall space upstairs that's just waiting for some art to fill it... Here's what we've got so far:
HPN
Postcards, Chris Henley, 2019
Framed by Mike Spring
The smaller postcard version of the Happenin' poster I mentioned in my previous post.

Three Musicians
Fused glass, Emma Owen, 2017
Chocolate Box
Acrylic on canvas, Emma Owen, 2004ish
I mentioned that my sister in law works in glass and this is an example of that. A copy of Picasso's Three Musicians recreated in fused glass. She takes commissions for glass art, coasters, tiles, bowls and more. Below that is another pixel square painting, this time of a box of chocolates. We love the colours in this one - it complemented our bedroom when we first bought it and now sits perfectly alongside our bold red wall in the hall at the top of the stairs. 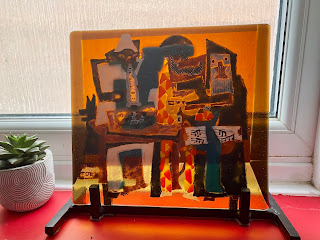 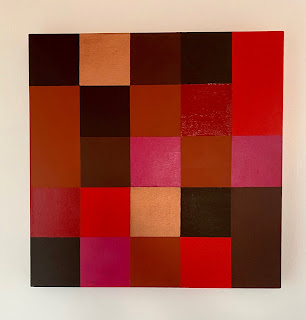 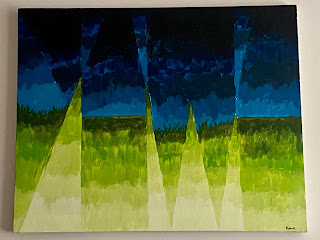 A few years ago I had an idea to paint a series based on Psalm 8. This was the first of those paintings, depicting verse 1, "Oh Lord, our Lord, how majestic is your name in all the earth!" If you trace the straight lines you should see the word YHWH (Yahweh) within the green and blue of land and sky. It's really very badly executed and if I had half a chance (or the inclination) I'd paint the whole thing again, only better. I never completed the series, but the second painting hangs in our friend's studio in Coleraine and is, in my opinion, a far better painting.
The Bear Club
Graphic novel print, Karl Brown, 2019
Story by Neil Fox
Framed by Mike Spring
One of the reasons we love living in Luton is it's innate creativity. There are so many brilliant artists here, in all fields. Last year Luton published a graphic novel featuring stories from a range of local writers, illustrated by just as many local artists. It's really wonderful. This story is about our beloved Bear Club, written by Filmstock co-conspirator Neil Fox, and drawn by Karl Brown. See a behind the scenes photo here. How could we not add this to our collection? 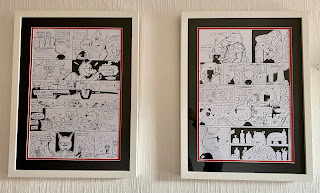 Durban Cathedral Scenes
Watercolour on paper, Peter Croxon, 2014
Framed by Mike Spring
And finally... these are two scenes from downtown Durban; another souvenir from our travels. They were painted by Peter Croxon, who, with his wife Belinda, hosted Dan and I and another of our team members for a few weeks in their home. While we were there, Peter was researching his family tree and I realised that my grandmother's maiden name was Croxon. It was a lovely surprise to find her and my great aunt on the family tree he was constructing. What a random co-incidence to end up staying with a distant cousin on our trip? Peter retired from his job as an architect a few years ago and now spends his time painting and selling the paintings. We used a little of the money we inherited when Grandma died to buy two paintings of a place we remember so fondly. 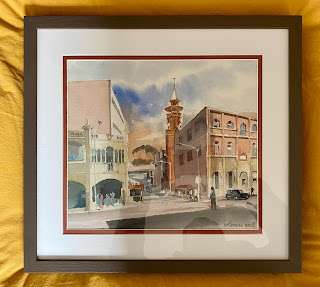 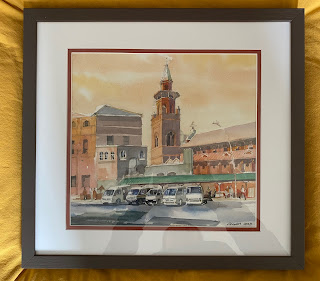 _____
Posted as part of Kerenza's Bloggers' Art Gallery. Please do visit hers, and other galleries too. 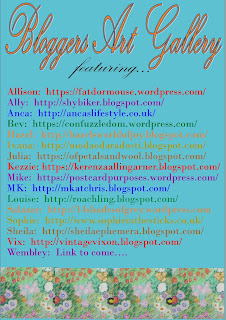 Email ThisBlogThis!Share to TwitterShare to FacebookShare to Pinterest
Labels: art

A gallery of our art, part 4: the dining room

The penultimate stage in my gallery for Kerenza's series. This time I'll show you the art in the dining room which also doubles as a music room. In fact, at the moment, probably more music than dining. Anyway... to the art...
Mappa Mundi
Gold paint on paper, Ewan David Eason, 2018
Dan gave me this for my 40th birthday. Ewan David Eason created a series of map prints like this one although the originals were made from gold leaf! The maps are a response to Charles Booth's Descriptive Maps of Local Poverty from the late 1800s in which areas were colour coded according to lower, middle and upper class. Easons decision to paint every area in gold presents an egalitarian society. Of course, Luton wasn't included in his original list of locations so Dan commissioned this one specifically. I love it. See other cities (and actual gold leaf art) on Ewan's website. 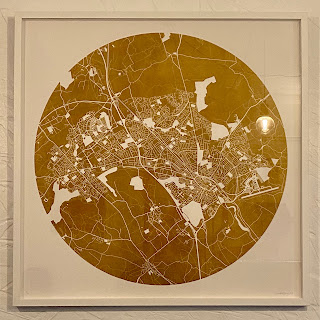 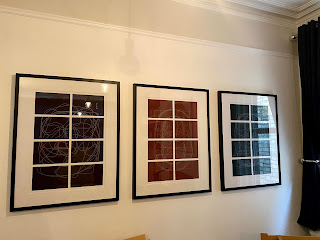 These works of design genius are from our friend Andy Brown. Each of these is a set of 8 A5 cards which come together to form the full image. The image itself is the numbers 0-9 all overlaid in outline in three different fonts - Cooper Black on the left, Helvetica in the middle and Bodoni on the right. I could stand in front of them for hours tracing the outline of each number in my mind. Helvetica is certainly easier than Cooper! You can't really see the detail in this photo so it's definitely worth checking them out on his website. Andy gave us the Helvetica print for our tenth anniversary and we bought the other two to complete the set. It's taken us about seven years to get around to framing them though - so glad we did.
The Happenin'
Print on paper, Chris Henley, 2019 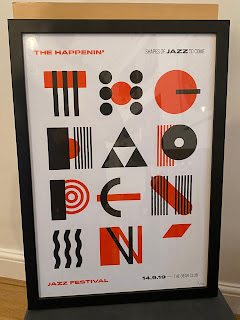 When the Bear Club turned five years old, we held a one-day jazz festival to celebrate. A gathering of some of the world's best jazz musicians and composers, all bringing new pieces to play together and workshop throughout the day. It was a fantastic celebration of jazz, of music, of creativity and of the Bear Club. This commemorative poster was designed by Chris Henley - a brilliantly creative designer who I really enjoy working with. (If there's a product, or a website for a project I've been involved with, you can be fairly confident he designed it!)
Maps from a house survey
Bog standard print, 2019
Framed by Mike Spring
I'm pretty sure this is another one that some people would struggle to call art. They're probably right. These nine maps were all in the survey we had done when we bought this house. Each one has our home right at the centre and shows different elements of our surrounding area - parks, education, contamination, planning permissions and plenty more. We took them to our framer, Mike, who had the brilliant idea of creating circular apertures in the mount rather than squares and we love it (so we don't care if it isn't art!) 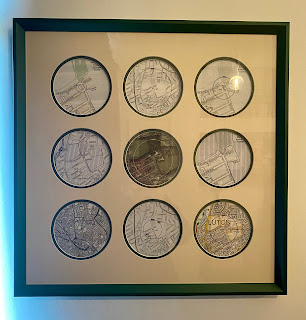 Grove's and a Pocket Trumpet
Grove's Dictionary of Music and Musicians, 1938 edition
Pocket trumpet from local junk shop, £20
Not art, you say? I'm not listening any more. I inherited the Grove's from my Grandad and they now live on a floating shelf above the piano while this pocket trumpet hangs just above. You can probably make out the shadow of a trombone on the wall too? 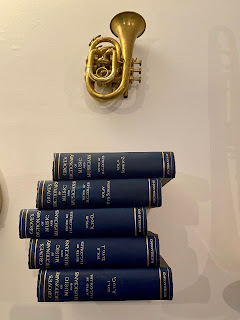 Carpet
Sample from our old house, 2019
Framed by Mike Spring
If you're a long-term reader of my blog, you might remember that when we bought our first house at the other end of the road, it had this hideous stripy carpet in every room. Every. Single. Room. It was overwhelming - see my earlier post if you don't believe me. Over time we grew to "love" it so when we moved out last October we kept a sample and have just recently had it framed as a memento of the first home we ever owned. 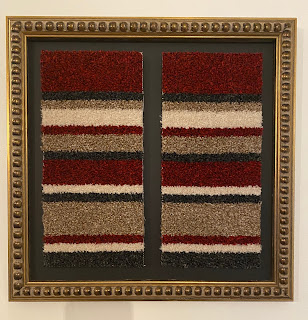 _____
Posted as part of Kerenza's Bloggers' Art Gallery. Please do visit hers, and other galleries too.

Blog Posts I Wish I'd Written